PUG is a tool for creating complex 2D game GUIs. Coding GUIs and in-game animations by hand annoyed me beyond measure during every game jam, so I’ve created PUG to create flexible GUIs quickly in a WYSIWYG way, including animations. PUG stands for “Prepare Ur Gui” :]

is a visual editor that can produce .pug files. Heavily inspired by Flash IDE and Demopaja. 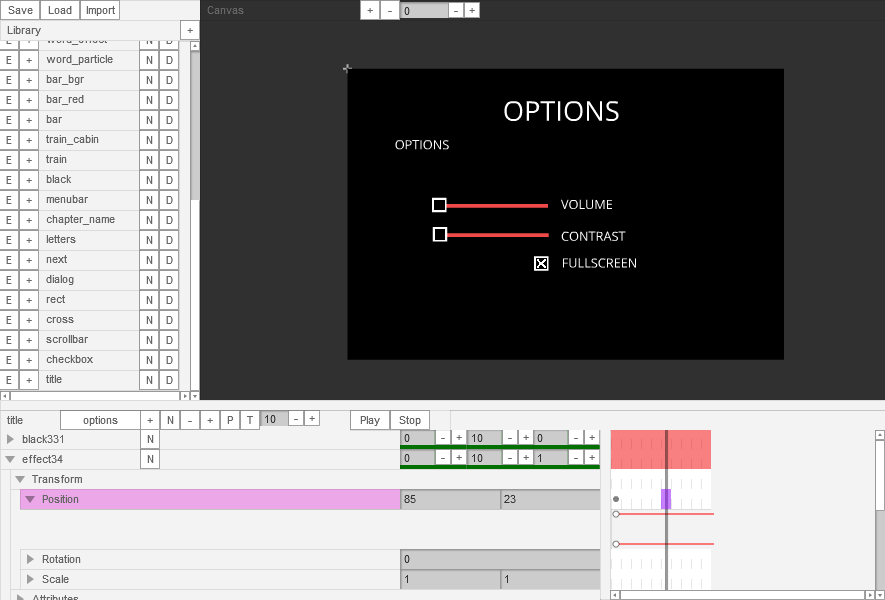 is actually a .zip containing a couple of .png files and a .xml describing the hierarchy.

Library – the .pug file contains a set of symbols (similar to Flash)

SVG – import .svg vector drawing (Inkscape <3), use its parts as symbols, animate them

STEP 1: Create your GUI using multiple .pngs or .svgs, draw all game screens and GUI animations, then export it to a single .pug file. STEP 2: Load the .pug file at runtime within your game, render any of the symbols, play and switch their states, change text labels.

PUGedit is currently written in haXe NME, builds will be available for Windows, Linux and Mac, there’s also a browser-based Flash version. PUG itself is currently available for haXe NME only (tested on flash, neko and android targets). In future there might be loaders for other languages or engines (flash, Javascript, Unity, Löve).

Sources for PUG and PUGedit will be open, PUGedit builds are paid.

I’m making the PUG mainly for my games. The PUGedit itself is still very crude and hard to use, I’ll release it when it’s ready.

My fiancé saw some of my scribblings and misread “dog.png” as “dog.pug”. Then I thought that pugs are quite cool and thus the name was settled.